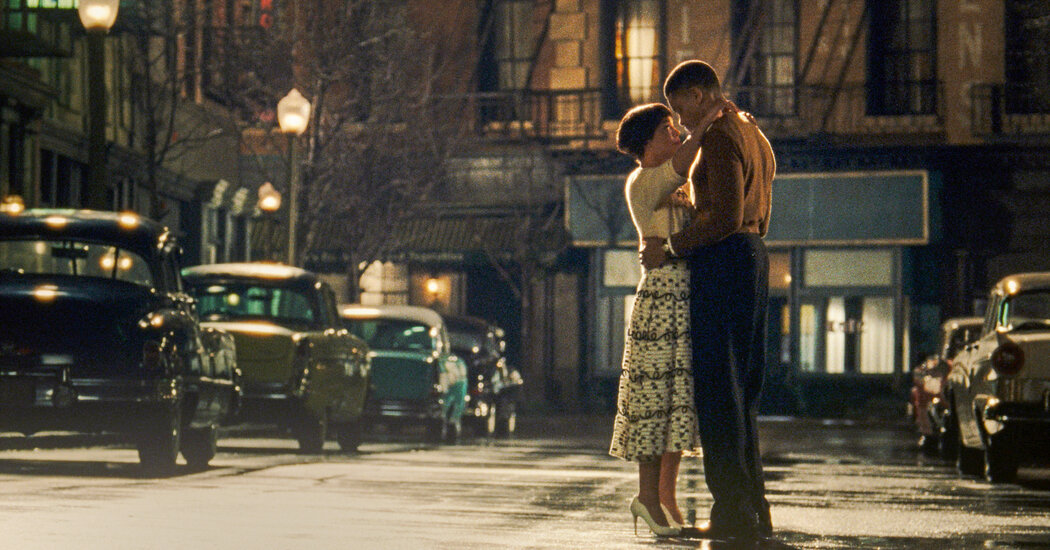 Desires and dreams meet beautifully in “Sylvie’s love”, an old-fashioned romance for the heart of the 21st century. It is moderately scaled but still emotionally expansive and traces a couple of young lovers over years of happiness and remorse, from the late 1950s to the early 60s. When the world turns, they meet, fall hard, hesitate and separate. In the midst of kisses and sighs, Nancy Wilson sings (“all my bright mornings belong to you”), and the screen flows with bold colors and passions. Leave the fortress you are hiding in, says this film. Let the emotions come in, let the tears flow – this is what the films are created for.

Our heroine, Sylvie – an irresistible Tessa Thompson – lives with her parents in Harlem. She works in her father’s record store (monk in the dustbin, Sonny Rollins over there) and dutifully models when her mother teaches labels to girls in saddle shoes. Sylvie, with her pixie haircut and perfectly fitting turtleneck, her eyes and softly expressive face, looks like she should wait for her close-up on the Metro-Goldwyn-Mayer backlot. But she’s a black woman in 1957 in America, and that kind of movie worship will not be given to characters like hers until movies like this can be created, movies that show you what movies can and should have been.

When an upcoming saxophonist, Robert (Nnamdi Asomugha, a producer on the film), enters the record store, the story quickly sets in. Sparks fly, although it takes Sylvie a little longer than Robert to notice (or admit) what is happening. She has a fiancé, the son of a wealthy doctor, whom she met at a cillillion. What is a cotillion, asks Robert, one of the story’s nods at class difference. But Robert is sweet and flirty, and soon he and Sylvie are restlessly exchanging meaningful looks. When they finally kiss, the moment is as shaky and carefully staged as a classic studio romance: It’s night, the lighting is beautiful and so are they.

“Sylvie’s love” is just the second feature from Eugene Ashe, who knows how to move the camera (and when not), but also how to stage inside the frame. He is an obvious filmmaker; a scene in a Chinese restaurant flooded with red lights reads like a fluttering valentine to Wong Kar-wai’s “In the Mood for Love.” But Ashe does not engage in fanboy allusions to burn his references. Rather, like Todd Haynes in his tragic melodrama “Far From Heaven” (and Douglas Sirk once in his studio days), Ashe uses a familiar, long-haired film genre both lovingly and critically to explore the glittering surfaces of life and the anxiety that lies beneath.

As Ashe takes melodrama seriously, he commits himself to his lush sincerity. He does not blink at you and asks to know giggles about the nakedness of emotions. Instead, he asks you to go into everything, fall in love with Sylvie and Robert the way they tumble for each other, worry and root for them. It’s easy to do because both actors are so appealing. Thompson’s ability to expand emotions is especially important for what Ashe does and why he holds her face when she first hears Robert play in a club. When she listens, her face opens and emotions rush in – animating it, warming it – and it’s clear that she is now really see him.

Ashe leans on Thompson and lets her do much of the work when Sylvie and Robert are together. Asomugha is a good reactor and nice to look at, but he does not have Thompson’s emotional range. The rest of the roles are first-class and include a number of welcoming faces, among them Eva Longoria, Lance Reddick, Erica Gimpel and Aja Naomi King. I’m less convinced by Jemima Kirke as the Countess, a rich jazz fan who sweeps into Robert’s life and provides cash and contacts. A more convincing emblem of how white paternalism comes in mantle under protection may have been good, but then, like most of the white characters, the Countess is quite irrelevant.

That’s to the point of the film. “Sylvie’s Love” does a largely convincing job of recreating a Hollywood melodrama from the 1950s, if not in all its details, then in its emphasis on passionate feelings and emotions. The characters do not sound like they have spent time on the couch; they sometimes talk and figure things out, but they do not explain with self-help insights. Sometimes they munch (“the times they are a-changin ‘”), because Ashe’s script is not always up to his ambitions. But it’s great when the filmmaking speaks, when the sumptuous score swirls and the palette vibrates with its many shades of blue and splashes of light red, green and pumpkin.

Ashe’s most radical feature is how he prepares classic melodrama to tell a story of black love that would never have been told in old Hollywood. (Today’s commercial mainstream has pretty much given up on pure romance, unfortunately.) Particularly instructive is his insistent focus on his characters’ inner lives, on what Sylvie and Robert long for and dream of, as humans, rather than as emblems of race or avatars. of ideal. The larger world is pushing in, as it must, and there are references to civic movements here and there. Yet equally important are all the white faces on TV shows that Sylvie watches, pictures that she studies and hopes will one day change.

Ashe wants you to think about the lives of his lovers, but he also wants you to faint, he wants you to make the empathic leap so that you feel – and think – about other lives deep in your body. Critics used to kind of melodramas and dismiss them as trehankies crying. Bring tissues, they wrote, advice that ridiculed both the films and their supposed female audience. You should grab tissues to see “Sylvie’s Love,” but I mean it encouraging. I saw the movie early one December morning alone. I was transfixed and transported. This year has given us many things to cry about, but here is a story to get lost in and to joyfully, gratefully, cry with.