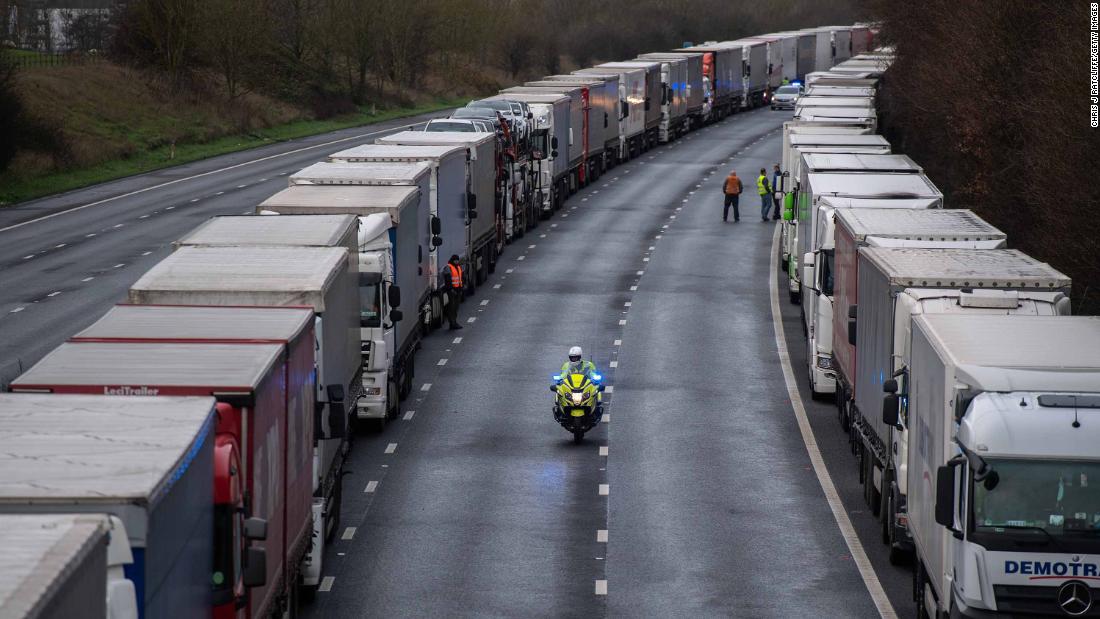 A statement from French Prime Minister Jean Castex’s office on Tuesday said that French citizens could return from the UK to France from Wednesday if they present evidence of a negative Covid-19 test at 72 previous hours. Other citizens living in France or the European Union may also enter France from the United Kingdom with a negative test result.

“Airplanes, boats and Eurostars will resume service tomorrow morning. French citizens, residents of France and those who have a legitimate reason must present a negative test,” tweeted France’s transport minister, Jean-Baptiste Djebbari.

Fearing the spread of a potentially more contagious coronavirus variant, France was among dozens of countries that closed its borders with the UK over the weekend.

France’s closure was the most significant, as it also restricted cargo entry. On Tuesday, some 3,000 trucks remained stuck in England and British supermarkets warned of a shortage of some products just days before Christmas.

According to a statement from the UK Department of Transport, admission to France will only be granted “to those traveling for urgent reasons – including transporters – French citizens and British citizens with French residence”.

This new protocol will be revised on December 31, but may remain in effect until January 6. All cargo truck drivers will be required to perform an antigen test that can detect the new Covid-19 strain and provide results in less than an hour, according to the statement.

France will also conduct sample tests on incoming freight to the United Kingdom, he added.

The French statement said that people entering France could also do a polymerase chain reaction (PCR) test instead of the antigen test. However, the response time for UK CRP tests can vary from one to three days, according to the latest data from the UK Department of Health.

The crossing between the English port of Dover and the French city of Calais is an important European commercial artery, and the port of Dover handles about 17% of goods imports from the United Kingdom.

As of Tuesday morning, about 873 vehicles were waiting at an abandoned airport, with approximately 650 vehicles on the M20 motorway, the UK Department of Transportation said.

Although drivers in Europe are not banned from entering the UK, fears have increased that transporters will resist doing so for fear of not being able to return home, leading to food shortages.

UK Transport Secretary Grant Schapps urged cargo truck drivers not to travel to Kent County, where Dover is located, until further notice, while a mass testing program for HGV drivers is underway. .

“We continue to ask transporters not to travel to Kent until further notice as we work to alleviate congestion at ports,” he said, according to the Department of Transport statement.

The period before Christmas is traditionally a busy time for trade, as fresh products from Europe are imported for the festive period. In addition, the UK is building up stocks before the end of the Brexit transition period on December 31.

On Monday, Sainsbury’s, one of the UK’s leading supermarket chains, said that if nothing changes, there will be a shortage of lettuce, some salad leaves, cauliflower, broccoli and citrus.

Meanwhile, the British government says it is providing food, drink and toilets to British truck drivers who are stuck in a traffic jam in the area around the Eurotunnel.

A Romanian driver named Adrian, who is stuck in Dover, told CNN: “A lot of people are taking their holidays here in the cars … they can’t go home. It’s not good. We are lucky because we are here in Dover, but many people are stuck on the roads. They can’t go to the bathroom or shower. “

“We don’t get respect in any way,” he said, adding that if the cargo trucks remain stationary, “no one will eat”.

Luke McGee and Salma Abdelaziz contributed to this report.