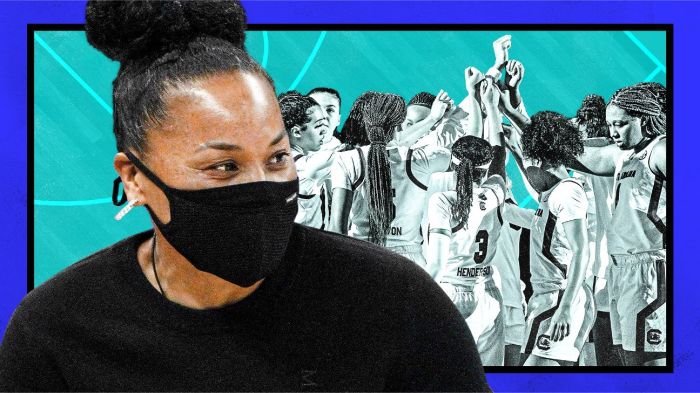 With college basketball back, South Carolina head coach Dawn Staley is continuing where she left off. For the first time in school history, Gamecocks began the year as the country’s No. 1 team. South Carolina is currently 4-1 and is ranked as no. 5 (Impartial Press).

Throughout the season, Staley will share his thoughts with The Undefeated, which tells the story of a season that will be unlike any other in college basketball history. In this part, Staley discusses how her team has recovered since then surprising loss to NC State on December 3 and shares his thoughts on whether the college basketball season should continue.

Sometimes you have to get your players’ attention. I did it after our game against NC State.

There was nothing I said at the press conference that I did not say in the locker room. It was almost verbatim.

Dawn Staley after South Carolina’s loss to NC State where the Gamecocks shot 27% and ended a 29-game winning streak from November last year: “I have never coached a team that performed that way. It was pickup basketball.” pic.twitter.com/u9Pa8pH5WU

I read a few tweets about, “Save it for the locker room.” But if my players have no problem with it, no one else should really have a problem with it.

If anyone has followed me and my coaching career, which consists of 21 years, I am the same. I think I’m pretty consistent with how I handle our players. I have been an open book as long as I have trained. My players and our coaching staff, we have a good relationship.

Was I frustrated? Absolutely. When you play such a great game, you want to play your best. You want to give yourself a chance to win the game. I just did not think we did.

Everyone who has seen our team play, they know it was not a sign of the South Carolina team that we trained this year last year the year before.

Zia Cooke reached out to me shortly after the match. She just wanted to know my thoughts on her game. We talked for about 45 minutes, just about basketball, and teaching and making her understand what we want for her – in the short and long term. Zia has an appetite for wanting to be the best. She’s not afraid to ask what I thought. She knows if she’s asking me what I was thinking, I’ll give her the truth.

I said, ‘Zia, can you get where you want on the floor?’ She said yes.’ I said, ‘Sometimes it takes you 10 dribbles to get there, but if you could cut it to four, it’s getting thinner.’ Then you have to give them the big picture: ‘The big picture is no one at this level, or the next level, will stand around for you to take 10 dribbles to get where you need to go because it just takes away too much rhythm from everyone else. ‘

This is exactly how to coach. This is exactly how young people should ask and want authentic conversations. While it may be critical, you do not care when you have a thirst to learn. You just want to hear it and you want to work on it.

She will return the next two days in practice, then we will play and see, she shot 50% from the floor. It would have been 60 if she had not taken two bad pictures, but she is still learning. I want her to be the country’s best 2-guard.

Everyone took that loss hard, everyone. Aliyah [Boston]I told her, I’m not really worried about you when it comes to points. What we need to work on is constantly putting you in situations where people have to take away your space and arm you with the things you need to do when they do. Stand strong, then break through and swing through and play strong. ‘Did she do that to the state of Iowa? Absolutely.

I can not go out and say that our team sucks and does not arm them with things to suck up. This is what we do. We went back to the drawing board.

I’m just been really happy that we got the chance to play probably more games than anyone else around the country. We had no cancellations, knocked on wood. It has been great to just have that mindset to play and prepare.

Our players really hold each other accountable in this because they want to play. They do not want a game stop. With certain variables, we have some control. Others, we do not, especially when we go in and out of places that are on the road. You watch our men’s program and they turn off no matter how many days it is. They came from the road, so you just never know.

It hesitates a bit. There is some reservation. When we went to South Dakota, everyone was like, ‘Well, why? Why would you hurt yourself? Why would you take your children there? Do not do it. ‘I said, “At the South Dakota tournament, we would be tested.” We tested twice in three days that we were there. We tested before we went. We never left the hotel. They created a bubble. There was very little contact with the outside. I just thought it was probably the safest place to do it.

Our team has kept that routine from the South Dakota trip. I’m glad it was our first trip. We began to see what we needed to do to try to keep, just to be as safe as possible.

When I went to the state of Iowa, I hesitated a little because it was different. People were free to come and go as they pleased in the hotel. I’m not leaving the hotel.

Dawn Staley Diary: How Coaches Helped Her Sister During Her Fight Against Cancer read now

Hopefully, if we have to go the road in the SEC, it can go as smoothly as our two road trips.

Of course, the question for everyone is whether we should even play.

It is difficult to answer that question because from our perspective we have done what we need to do. We have stayed out of the way so far. That does not mean we are out in the woods. As we continue, do we roll the dice? Perhaps perhaps.

Ultimately, the safety of our players is a top priority. I can see a place to shut everything down. But if you turn it off now, when will you ramp up again? When is it really sure? If we shut down, we should shut down the rest of the season. I’m not one who wants to come back two or three months on the road and want to put our players to injury for physical injury, just as COVID-19 can certainly put you out for a certain period of time or worse. If we are to shut down, I think we will shut down until we get control of it, the vaccines are safe to take and it ensures that we will not be affected.

I was taken back by the news about Demi Washington, a second-year guard at Vanderbilt, who announced that she was out for the rest of the season after being diagnosed with myocarditis. Every time something comes out like that, we always publish it on our staff thread. Of course, we just want to make sure she’s okay and that she does not hurt her heart further. It’s heavy for me.

I’m constantly talking to our players and they’re scared. They want to play, but it’s my job to make decisions that will put them in the best light. From now on, my training staff, our team doctor, all say that if we do these things, you reduce your chances of being shut down due to or affected by COVID-19.

I do not know what is the right thing to do. If you shut down, you will also have some other problems, just mentally for our players. When you say to a young person, ‘It’s your health that is in danger’, they are young, they are invulnerable when it comes to such things. If the season closes, we put in resources that help our players handle whatever they face.

I’m really good somehow. If we shut down, I think I’ll be okay with that. If we continue and nothing affects us, it has not so far, I am good at playing.

How I approach life is that you handle what is in front of you right now. Right now we have the season, so we will continue it.

Sean Hurd is the assistant editor of The Undefeated. He believes that the “flying V” is the most important formation in sports history.