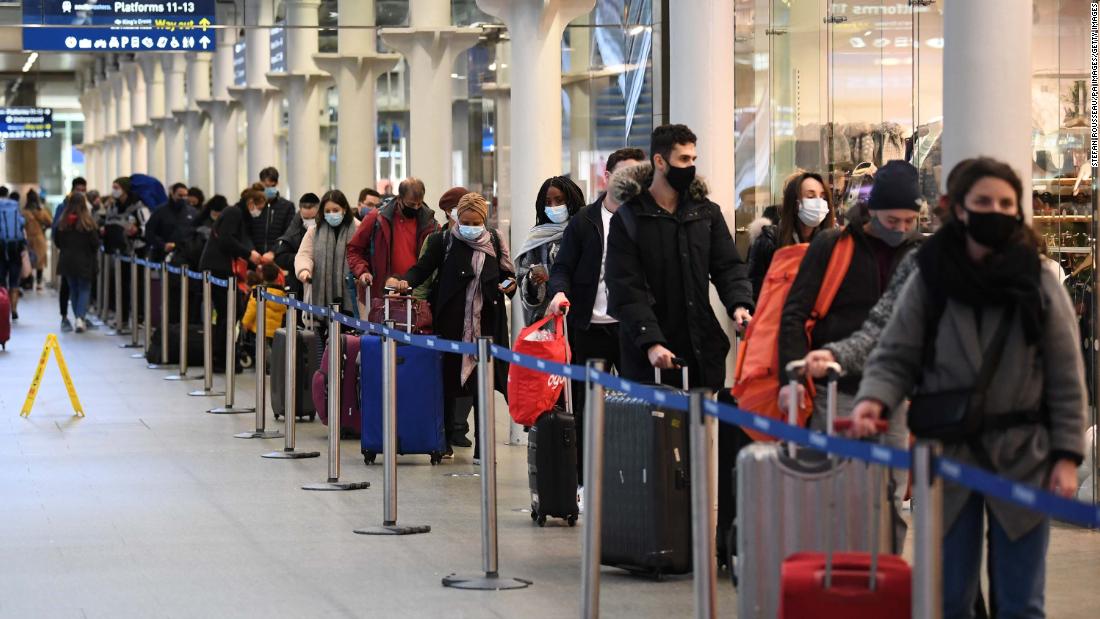 Here’s what you need to know.

A variant occurs when the genetic structure of a virus changes. All viruses mutate over time and new variants are common, including for the new coronavirus.

Like other variants, it carries a genetic fingerprint that makes it easy to track, and is now one that is widespread in southeastern England. This in itself does not necessarily mean that a variant is more contagious or dangerous.
But scientists advising the UK government estimate that this variant may be up to 70% more effective in spreading than others. Peter Horby, president of the New and Emerging Respiratory Virus Threat Advisory Group (NERVTAG), said on Wednesday that scientists are “confident” that the new variant is “spreading faster than other variants of the virus”.

Speaking at an emergency meeting of the UK Parliament’s Science and Technology Committee, Horby explained that the new variant has “some sort of biological advantage to make it faster”.

Scientists do not yet have a complete idea of ​​why, he said, but that there were some different scenarios that they were investigating.

There is preliminary evidence to suggest that the new strain results in a person with a higher viral load, which means that the virus is easier to transmit, Horby said.

Another possibility is that people will become infected more quickly after exposure, he said. It is also possible, he added, for people to be contagious for longer.

All of these possible explanations, however, lead to the same conclusion: the virus is spreading faster.

“These [17] are those that alter the protein sequence of one of the viral genes, “said Jeffrey Barrett, Covid-19’s leading statistical geneticist at the UK’s Wellcome Sanger Institute, according to the Science Media Center.

The World Health Organization said on Tuesday that these mutations “may influence the transmissibility of the virus in humans”, although it added that more laboratory investigations are needed.

Scientist Neil Ferguson, a member of NERVTAG, said Monday that the variant may be more infectious for children. “There is a tip is that [the variant] … is more likely to infect children, “he said at a news conference organized by the Science Media Center (SMC), although he warned that more data is needed. Serious illnesses caused by Covid-19 are still relatively rare in children.

The findings have immediate implications for virus control. More cases can put even more pressure on hospitals and health care staff as they enter a particularly difficult winter period and ultimately lead to more deaths.

Where did the variant originate and how did it establish itself?

The new variant is believed to have originated in southeastern England, according to the WHO. Public Health England (PHE) says retroactive screening, using genetic evidence, suggests that the variant first appeared in England in September. Then it circulated at very low levels until mid-November.

“The increase in cases linked to the new variant surfaced in late November, when PHE was investigating why infection rates in Kent [in southeast England] they were not falling, despite national restrictions. Then, we discovered a cluster linked to this variant spreading rapidly in London and Essex, “said PHE.

But Sharon Peacock, a professor of public health and microbiology at the University of Cambridge, said scientists did not know whether the mutation originated in southeastern England or was introduced there from elsewhere.

Speaking at a news conference on Tuesday, Peacock also praised the strength of the UK’s genetic surveillance operation. “If you are going to find [a variant] anywhere, you’ll probably find it here first, “she said.” And if it happens in places that have no sequencing, you won’t find anything, unless you’re using [other methods.]”

Whitty said on Saturday that the variant was responsible for 60% of new infections in London, which almost doubled just last week. On Wednesday, Northern Ireland’s Minister of Health, Robin Swann, said the variant was detected at its borders.

Health officials in the region said it was “increasingly likely” that the new variant would establish itself across the UK. “I advise the public to act on the assumption that it is already well established in Northern Ireland and that the person passing by on the street or standing nearby in a queue may have this,” said the region’s medical director, Dr. Michael McBride , in a statement.

Some experts have suggested that this new variant could have been extended because of an over-spreading event, which means that the current increase in cases may also have been caused by human behavior.

“When we started to see this huge increase, it could have been a number of things. It could have been [due to] changes in behavior, “said Judith Breuer, professor of virology at UCL, during a briefing on Tuesday.

“[But now] it is very clear that there is a significant increase in the prevalence of this variant and that this is probably due to the biological characteristics of the variant and, in fact, to the increase in transmissibility. “

Which countries are affected?

The variant has already spread globally. In addition to the United Kingdom, the variant has also been detected in Denmark, Belgium, the Netherlands and Australia, according to the WHO.

Australia identified two cases of the variant in a quarantine area in Sydney and Italy also identified a patient infected with the variant.

A similar but separate variant has also been identified in South Africa, where scientists say it is spreading rapidly along the country’s coastal areas.

On Wednesday, British health officials said two cases of the South African variant were detected in the United Kingdom. England’s managing director of public health, Susan Hopkins, said the Covid-19 variants discovered in the UK and South Africa are both “more transmissible”.

Is the new variant more deadly?

There is no evidence so far to suggest that the new variant is more deadly, according to Whitty and the WHO, although it is too early to say.

Several experts noted that, in some cases, virus mutations that increase transmissibility are accompanied by a drop in virulence and mortality rates.

“As viruses are transmitted, those that allow greater virological ‘success’ can be selected, which changes the properties of the virus over time. This usually leads to more transmission and less virulence,” Martin Hibberd, professor of emerging infectious diseases at the London School of Hygiene & Tropical Medicine, he told SMC.

Will the developed vaccines work against this variant?

There are still no signs that current pioneering vaccines will not work against this new variant, experts and drug manufacturers said.

The companies responsible for the first two vaccines to obtain authorization in the United States – Pfizer / BioNTech and Moderna – are testing their vaccines to see if they are effective against the variant.

The coronavirus has mutated before, and both companies say their vaccines have worked against other variations of the virus.

BioNTech CEO Ugur Sahin said he had “scientific confidence” that the current Pfizer-BioNTech vaccine could work against the new variant, but the full data will be available in two weeks.

Some scientists based in the United States have said that it is possible that this new variant could, to some extent, harm vaccines.

Trevor Bedford, associate professor in the vaccine and infectious diseases division at the Fred Hutchinson Cancer Research Center, said: “You could imagine some modest impact on the vaccine’s effectiveness, which would not be good, but I don’t think it will break the vaccine. “

Bedford explained that the variant could decrease the effectiveness of the Pfizer / BioNTech vaccine by 95%, which would be a “modest – not dramatic effect”.

Sahin, from BioNTech, said the new variant may, however, require countries to vaccinate more of the population, increasing the herd’s immunity level.

“[On] the topic of herd immunity is always about 60-70% discussion, “he said at a news conference on Tuesday.” But if the virus becomes more efficient at infecting people, we may even need a high rate of vaccination to ensure that normal life can continue without interruption. “

What measures are being taken to contain the variant?

Large areas of England, including London and the south east, are now under strict Tier 4 Covid-19 restrictions, and health experts from the UK government have suggested that additional restrictions might be needed to combat this variant.

Dozens of countries in Europe, the Middle East and the Americas have also announced a ban on travel to the UK or new testing and quarantine requirements for arrivals to the UK.

The White House is considering requiring UK travelers to present evidence of a negative test before arriving in the United States, two government officials told CNN.

In the UK, new measures were announced to combat the potential spread of the South African variant on Wednesday, with travelers arriving in the UK from South Africa now having to be quarantined for 15 days after arrival. People in the UK who have been in contact with people who have arrived from South Africa in the past 15 days have also been instructed to quarantine immediately.

In its statement on Tuesday, the WHO recalled the basic measures to reduce transmission of the virus: avoid close contact with infected people, wash your hands frequently and wear a mask.