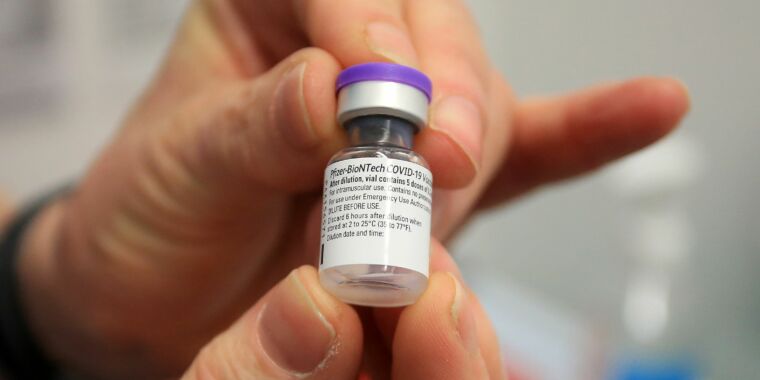 The federal government has reached an agreement with pharmaceutical company Pfizer to guarantee 100 million additional doses of the Pfizer-BioNTech COVID-19 vaccine before the end of July, the company said today.

Health and Human Services Secretary Alex Azar said in a statement that the additional Pfizer vaccine “can give Americans even more confidence that we will have enough supplies to vaccinate all Americans who want it by June 2021”, when added to the 100 million doses of the US government has already agreed to buy from Pfizer, as well as the recently approved Modern vaccine.

The government also ordered a total of 200 million doses of the Modern vaccine, which is now also in use. Each vaccine requires that each person receiving it receive two doses, so that 400 million total doses are sufficient to immunize about 200 million people.

Pfizer initially offered the additional doses in its first round of negotiations with the United States government in July, The New York Times was the first to report. At that time, the feds agreed to an initial order for 100 million doses, but repeatedly refused to close an order between 100 million and 500 million additional doses, “despite repeated warnings from Pfizer employees that demand could well exceed the ofert”.

When American officials refused to make a commitment, Pfizer reached agreements with other nations to sell the vaccines it could make. In order to reach a new agreement with Pfizer to guarantee 100 million additional doses in the first half of 2021, the government agreed to invoke the Defense Production Act to give the company access to the specialized supplies it needs to increase production, The New York Times reported.

The Food and Drug Administration granted emergency use authorization for the Pfizer vaccine on the night of Friday, December 11. Vaccine shipments to facilities across the country began almost immediately, and health workers’ first immunizations were underway the following Monday morning.

Soon after the first wave of vaccines was launched, however, the distribution reached a few points. More than a dozen states found that they would receive significantly less doses than expected – half or less of the expected volume – in the second week of vaccine distribution. States, of course, asked the feds, and HHS Azar identified the “core problem” as “Pfizer’s ability to manufacture” vaccines quickly enough around “production challenges”.

However, Pfizer in a statement pointed the finger directly at the US federal government for the confusion.

“Pfizer is not experiencing production problems with our COVID-19 vaccine and no shipment containing the vaccine is suspended or delayed,” said the company on December 17. “This week, we have successfully dispatched all 2.9 million doses that we have been asked to send by the United States government to the locations they specify. We have millions of additional doses in our warehouse, but so far, we have not received any. shipping instructions for additional doses. “