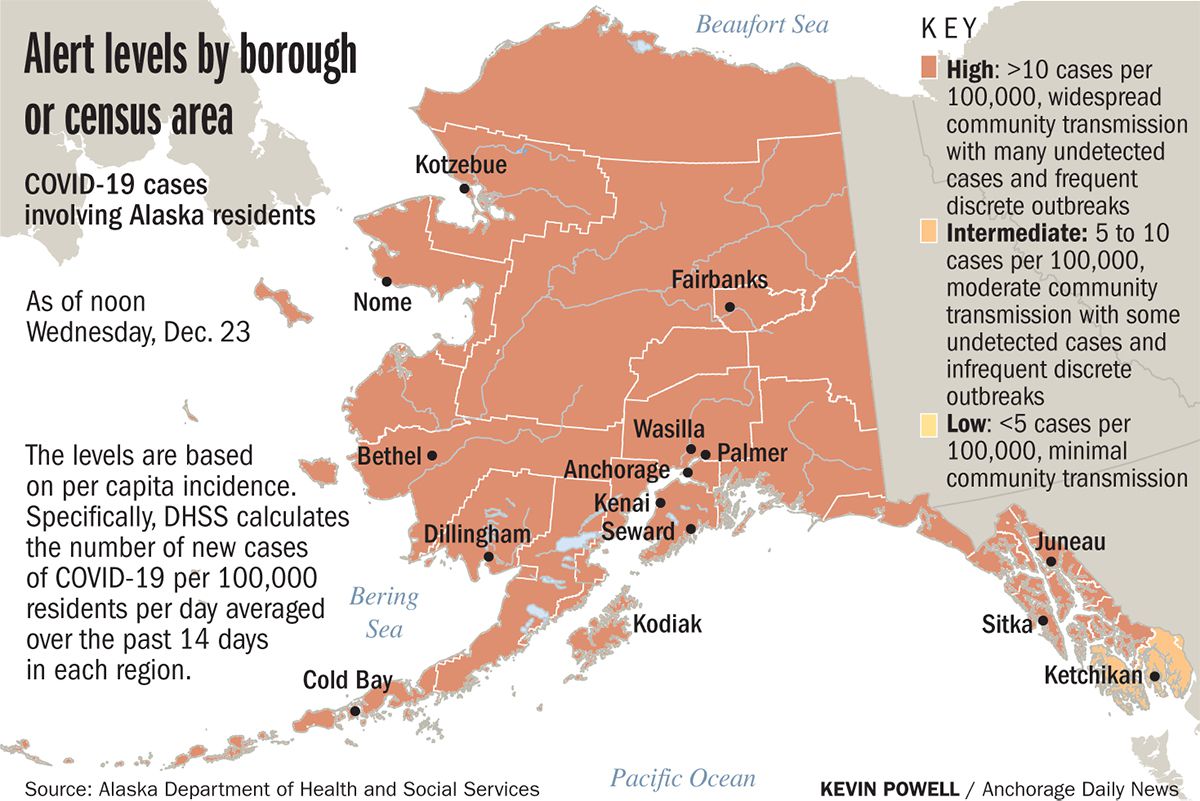 We are making this important information available without a subscription as a public service. But we depend on the support of the reader to make this work. Consider supporting independent journalism in Alaska for just $ 1.99 for the first month of your subscription.

All three deaths were from Anchorage residents, state data showed.

In total, 196 Alaskans and a non-resident with COVID-19 have died since the pandemic started here in March. Alaska’s overall death rate per capita is among the lowest in the country, but officials say the state’s vast geography and vulnerable health system make comparison with other states difficult.

Almost 60% of the people who died from the coronavirus in Alaska were residents of Anchorage.

After recording excessively high case counts until November and early December, infections and hospitalizations in the past few days appear to be stabilizing across the state, state officials said.

However, the number of infections reported daily remains higher than reports during spring, summer and early fall, and hospital capacity and staffing issues remain a concern, state officials say.

They attribute part of the drop in cases to the Anchorage “squat” order in effect throughout the month and continue to urge Alaskans to avoid meeting people outside their homes during the holidays.

As of Wednesday, there were 106 people with COVID-19 in Alaskan hospitals, including 15 who were on ventilators, and five others in the hospital with suspected cases. Across the state, 56 beds in the intensive care unit were available on Wednesday.

As of Wednesday morning, the state’s vaccine page showed that 8,918 people in the state had so far been vaccinated. This tracker shows the number of vaccines administered a little behind real time.

Of the 355 cases reported in Alaskan residents on Wednesday, there were 118 in Anchorage, one more in Chugiak, 33 in Eagle River and two in Girdwood; two in Homer; two in Kenai; one at Seward; seven in Soldotna; one in Sterling; 20 in Kodiak; one in Cordoba; one in Valdez; 33 in Fairbanks plus nine at the North Pole; two at Delta Junction; eight in Tok; one on Big Lake; 40 in Palmer; 25 in Wasilla; seven in Utqiagvik; one in Juneau; one in Ketchikan; one in Craig; four in Sitka; three in Unalaska; and 14 at Bethel.

There were also four cases among non-Alaska residents, including two in Juneau, one in Unalaska and one in an unidentified region of the state.

Although people can be tested more than once, each case reported by the state health department represents only one person.

It is not clear how many of the people who tested positive for the virus had symptoms. The Center for Disease Control estimates that about a third of people with COVID-19 are asymptomatic.

The positivity rate for the test across the state on Wednesday was 4.91% over an average of 7 days. Health experts say that anything above 5% can indicate inadequate testing and potentially widespread transmission in the community. The state peaked at more than 9% test positivity in mid-November.