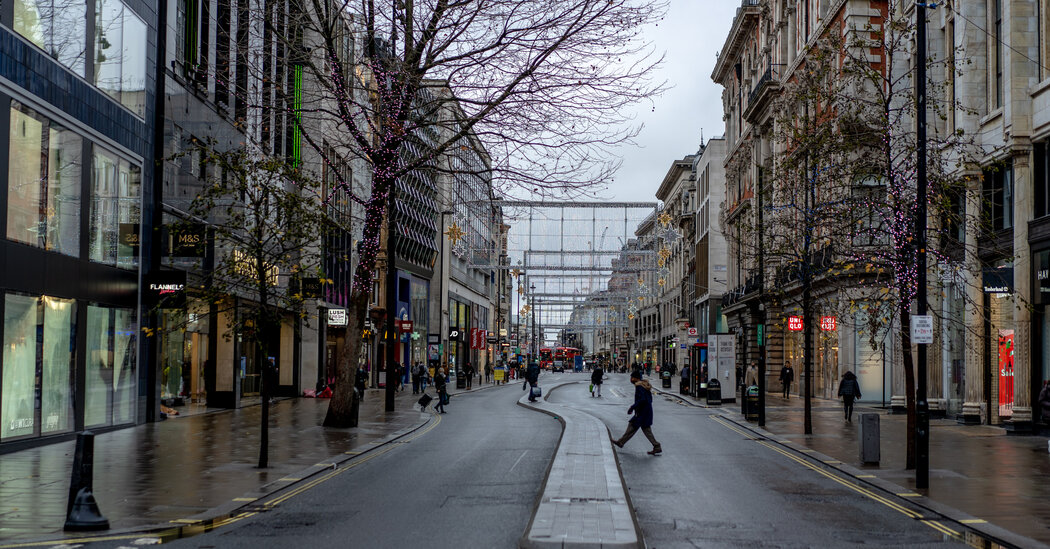 LONDON – British authorities placed even more areas of England under the strictest restrictions on Wednesday, as authorities struggled to slow the spread of a coronavirus variant that is potentially more infectious than those that have already wreaked havoc worldwide. .

The French government has lifted a 48-hour blockade of the British border in order to prevent the spread of the new variant. But Wednesday’s effort to move traffic fell into chaos as authorities struggled to carry out the tests required for thousands of drivers trapped in English ports to leave the country.

On Wednesday night, traffic started moving again, according to the British Broadcasting Corporation. But more than 5,000 trucks bound for Europe are still congested near the port of Dover, on the other side of the French Channel. Frustrated drivers were furious at the prospect of a fourth night sleeping in their vehicles. A transportation company said its drivers had to throw away more than 45,000 kilos of spoiled food.

With uncertainty revolving around the December 31 deadline for a post-Brexit trade deal, a virus is spreading at surprising speed, exhausted health workers struggling with a stream of patients and millions of people confined to their homes while Holiday lights shone on the deserted streets, the Christmas season was preparing to be exceptionally brutal.

In addition to this pain, Britain depends on importing fresh fruits and vegetables, especially in winter. Supermarkets have tried to reassure customers that there is enough food, but have warned that some fresh produce may run out of stock at the end of the week if delays continue.

Tesco, one of Britain’s largest supermarket chains, sent emails to customers on Tuesday to say it had “good availability” of items imported from France, but that it imposed temporary purchase limits for some items, including eggs and toilet paper.

The most urgent concern, British officials said, is to slow the rapid spread of the virus, which they attributed to the efficiency of the new variant. Britain reported 39,237 cases on Wednesday, 56% more than the previous week, according to a database in The New York Times.

The number of people in the hospital – almost 19,000 – is close to where it was at the height of the spring outbreak. And 744 deaths were reported on Wednesday.

“In this scenario of increasing infections, increasing hospitalizations and an increasing number of people dying from coronavirus, it is vital that we act,” said Matt Hancock, the British health secretary.

Areas in the south and east of England – including Cambridgeshire, Norfolk, Oxfordshire, Suffolk and Sussex – are set to move to the highest level of restrictions starting on Saturday, joining London and much of southeastern England. The rules require people to stay at home, except for urgent trips, medical appointments and outdoor exercises, and Hancock said limiting human contact is the only way to protect people.

British officials have also expressed concern about the spread of another strain of the virus identified in South Africa. Hancock said the transmission was even easier than the mutation that generated the blockages in England.

Scientists are currently studying both newly discovered variants. Although early indications suggest that both are more transmissible, more laboratory tests are needed to gain a more complete understanding of the dangers they pose.

Hancock said British officials had detected two cases of the South African variant. In both cases, infected people have been in contact with people who have traveled from South Africa to Britain in recent weeks.

Those infected with the new variant and their close contacts will be quarantined, and Hancock said that travel from South Africa would be restricted. At least five other countries have imposed similar restrictions on travelers from South Africa.

More than 50 governments have banned travelers from Britain since Saturday, when Prime Minister Boris Johnson first raised the alarm about the spread of the variant in England and imposed the new blockade.

French authorities also blocked shipments of goods for 48 hours, saying that closing the border was necessary to establish testing protocols, given the alarm over the variant.

The British Army was mobilized to help the National Health Service, the country’s health system, set up facilities to administer rapid coronavirus tests to drivers and went from truck to truck to do tests.

But it was slow.

On Wednesday, with traffic virtually stopped, drivers who had already spent days on their platforms were frustrated and confused about how to test.

As the tension grew, the police clashed with angry drivers, desperate to return home for Christmas. TV footage showed scenes of shoving and shoving. Police in Kent, which includes the port of Dover, said at least one arrest was made.

There was concern that the confusion on Wednesday might be a prelude to the logistical nightmare that would come, especially if trade negotiations between Britain and the European Union ended without an agreement.

Tom Binks, the managing director of Peter Green Chilled, a chilled and frozen food transport company, said his drivers had to throw away more than 45,000 pounds of lamb, chicken, cheese and yogurt since Monday. But even before the border was closed this week, he said, its drivers have already waited up to six hours at the port of Dover this month.

“The port is basically overloaded,” said Binks, adding that there was a lack of infrastructure to deal with the increase in shipment volumes as the pandemic and Brexit generated panic in purchases. “And on top of that, the French decision. It’s just unbelievable. “

He said delivery volumes were 70 percent higher this month than in other months, due to increased orders for Christmas and inventory from Covid-19 and Brexit. In recent years, December delivery volumes have increased by 30% compared to the rest of the year, he said.

Authorities warned that the release of more than 5,000 trucks bound for Europe could take days.

“I think it will take a few days to resolve the problem,” Robert Jenrick, a government minister, told Sky News on Wednesday. He also said that any driver with a positive result will receive a more accurate PCR test, which takes longer to process. If that were also positive, hotel accommodation would be offered for 10 days’ isolation.

Rod McKenzie, the policy director for the Road Haulage Association, which represents the British road transport industry, said that probably 8,000 to 10,000 trucks are waiting to cross the border.

Some drivers have already spent three nights sleeping in their trucks with limited access to food and toilets and were looking for a room on Wednesday. Trucks carrying goods from mainland Europe to Britain were allowed to pass through the ports this week, but their number has dwindled amid fears that drivers will be stranded as soon as they cross into Britain.

Binks, the managing director of the transport company, said he was more concerned with what will happen after December 31, when Britain will no longer be part of the European Union’s single market and customs union.

“We have about 15 trucks leaving next week and I don’t know whether to send them or not,” he said. Food shortages and other disruptions to deliveries are inevitable, he said.