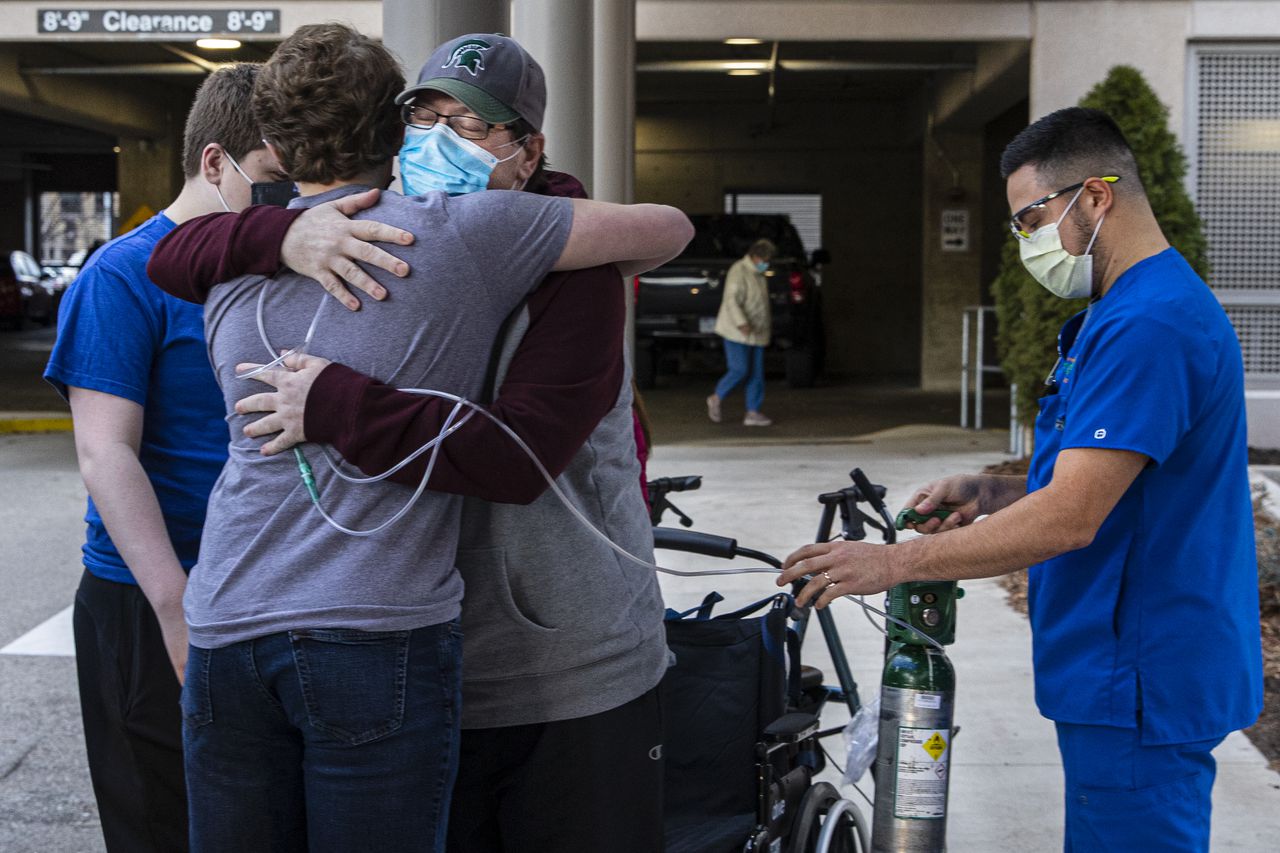 The visit to the hospital in the middle of the pandemic was only allowed because he might not survive.

But on Wednesday, December 23, just two days before Christmas, they were able to see their father again – this time hugging him when he was released from the hospital after a dangerous three-month battle with COVID-19.

“From a medical point of view, talking to the ICU documents and reading the reports, I shouldn’t be alive,” said Finkbeiner, a family doctor at Mercy Health.

“The idea that I’m going home before Christmas to be with my family, I couldn’t have asked for a better Christmas present.”

Finkbeiner, 47, has not yet fully recovered. He has nerve damage in his feet and hands because of the virus and is able to move with the help of a walker. Your lungs are still weak and need small amounts of supplemental oxygen.

The problems must be resolved with time and physical therapy, he said, and are a far cry from the five weeks he spent unconscious on a respirator fighting for his life.

His wife, Laura, and two children also contracted COVID, but had a very different experience.

“Try to take COVID seriously, because you don’t know,” said Channing Finkbeiner. “You can be like my wife and kids, who got sick for a week and got better, or you can be like me and fight for your life.”

Channing and Laura Finkbeiner say they owe their “miraculous” recovery to God, a profusion of prayers and the specialist doctors at Mercy Health Saint Mary and Mary’s Free Bed Rehabilitation Hospital in Grand Rapids who cared for him.

Accustomed to being the doctor and not the patient, Channing Finkbeiner called it a “humiliating” experience that gives him a whole new perspective on his role as a caregiver.

Channing Finkbeiner developed symptoms of COVID-19 in late September, and after about a week of quarantine at home, these symptoms got worse to the point that he could barely breathe. His wife rushed him to the Mercy Health emergency room in Grand Rapids.

“I woke up on Friday morning completely out of breath and unable to breathe. That was scary, ”he said. “Honestly, I don’t think I’ve ever been more scared than when I was in the ER.”

That was one of the last things he remembers before he was unconscious for almost six weeks.

He was intubated a few days after his arrival and, shortly afterwards, his condition worsened and palliative care was triggered.

“In the first week that he was on the vent, it decreased very quickly,” said Laura Finkbeiner. “Almost five days later, we were asked to bring the boys so that we could all see him. They just weren’t sure if he would survive. He was not actively dying at the time, but we were visiting him and they were just making end-of-life visits at that time. It was overwhelming. It is difficult to process. “

From then on, his condition remained stable and slowly improved with some setbacks here and there.

Being unable to speak to her husband for about six weeks, Laura Finkbeiner said the show of support from Channing Finkbeiner’s friends, family, co-workers and even co-workers and patients helped to comfort her during that time.

“It was just a long time to be concerned about whether he would survive or not,” said Laura Finkbeiner. “Many people regularly told me that they were praying for us and thinking about us and how they could take care of us.”

In all, Channing Finkbeiner spent 37 days on a ventilator and 47 days in total at the intensive care unit in St. Mary’s.

When he was transferred to the Mary Free bed for rehabilitation on November 24, he needed significant amounts of oxygen and had minimal ability to move his body.

He said he understands why some are upset about the restrictions everyone suffers from COVID-19, but recommended that people wear masks and follow social distance protocols.

Finkbeiner, who says he barely survived, said it is not just the elderly who are dying or becoming seriously ill with the virus.

“The potential risk we put on each other, you just don’t know,” he said. “You don’t know if you’re going to be a 20-year-old college student against an 80-year-old grandmother who will either end up dying or be seriously disabled by the virus. It is not something we know for sure.

Finkbeiner said he is confident in the safety of the COVID-19 vaccines.

“The first opportunity that I have and my family has to get the vaccine, we are going to do that,” he said.

As for those who cared for him during his three-month battle, Finkbeiner had nothing but good things to say about the professionalism and service level of the medical staff at St. Mary’s and Mary Free Bed.

The “encouraging” trend lines show that coronavirus numbers in Michigan are going in the right direction, state officials say

US orders over 100 million doses of Pfizer vaccine