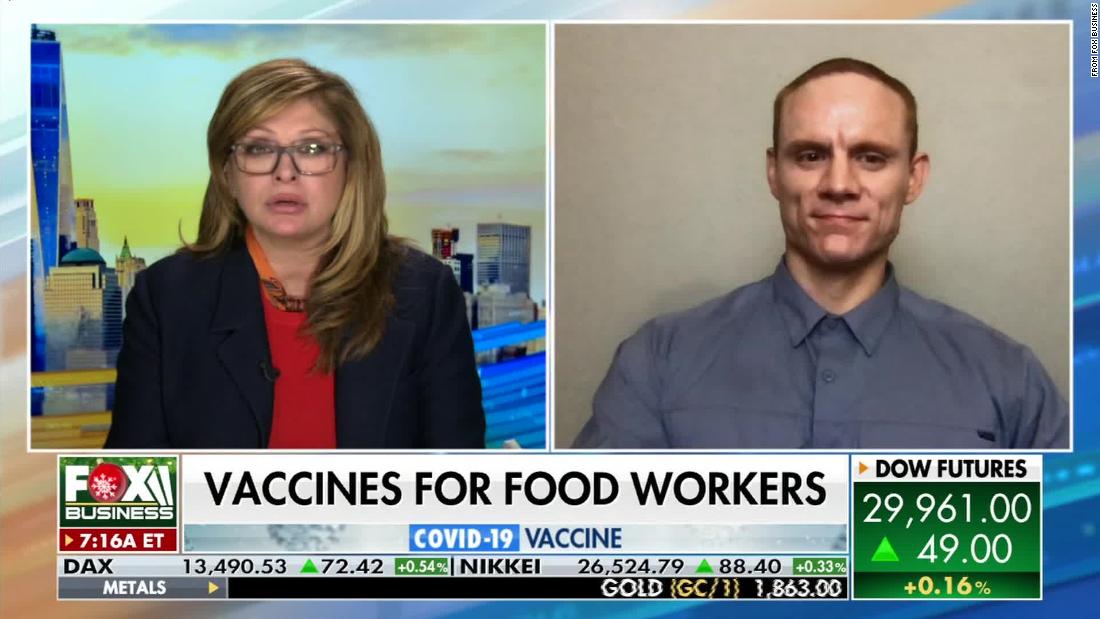 Bartiromo believed he was interviewing Dennis Organ, president and CEO of Smithfield Foods, the self-proclaimed largest pork producer in the world. In fact, she was interviewing Matt Johnson, press coordinator for the animal rights group Direct Action Everywhere. For six minutes.
The embarrassment is hardly the first time Bartiromo has made headlines for scrapes on his show. Wednesday’s incident follows several segments of Bartiromo’s program in recent weeks, expanding conspiracy theories about the election without any resistance.
Bartiromo’s repeated mistakes and false information suggest a lack of editorial standards and basic fact checking. A quick search of the Internet by the Smithfield CEO points to the company’s official leadership website, including a photograph of Organ – who looks nothing like Johnson (Organ is a bald redhead; Johnson, well, he’s not.)

Responding to a request for comment, a Fox News spokeswoman pointed to Bartiromo’s on-air correction, where she promised more vigilance.

“Fox Business broadcast a segment that was a complete scam,” said Keira Lombardo, managing director of Smithfield Foods, in a statement. “A simple Google search for a photo of our CEO would have prevented this from happening. This allowed false information to be aired, and Fox apologized for this total lapse.”

Wednesday’s interview started innocently. Bartiromo asked his guest about a Covid-19 outbreak at a Smithfield Foods South Dakota plant and the company’s plans for the distribution of vaccines. Johnson (posing as Organ) responded as a CEO would, with corporate language and platitudes about the company’s “dedicated and resilient” team, “brave” workers and a commitment to providing “extensive personal protective equipment” to employees. Nothing to see here. Still.

Two minutes of interview, however, things have changed.

“As Smithfield’s new CEO and president, I personally promise that we will do better, and the first change under my leadership is transparency and, at times, brutal honesty.”

Johnson went on to say that the food industry could contribute to the next pandemic, arguing that farms are “petri dishes” for infectious diseases. Smiling, pausing, “hmmm” and “you know” during the disjointed interview, Johnson certainly did much to warn Bartiromo and his team that he was not who he claimed to be.

At the end of his show, Bartiromo issued a correction.

“We want to apologize to Dennis Organ, Smithfield Foods and our audience for making this mistake,” she said. “We will, of course, be more vigilant.”

A history of misinformation

On November 29, Bartiromo gave President Donald Trump his first TV interview since the election, and the conversation was riddled with lies and conspiracy theories that were not checked. Bartiromo opened the interview saying: “the facts are on your side”. After the president falsely said that there was electoral fraud, Bartiromo said: “This is disgusting and we cannot allow America’s election to be corrupted”.
Last week, Bartiromo said “a source of intelligence” is “telling me that President Trump did indeed win the election”, although Fox called the election for Biden. Election officials, the United States Department of Justice and the Department of Homeland Security said there was no widespread electoral fraud.
She also frequently expanded conspiracy theories and false information prevalent on Fox News about alleged irregularities in the electronic ballot box – including that the software was used to manipulate the election and that there was a direct connection between the companies that make electronic voting machines in America and the philanthropic billionaire liberal George Soros. Fox’s programs hosted by Bartiromo, as well as presenters Jeanine Pirro and Lou Dobbs, subsequently published a news package debunking these allegations after the voting technology company Smartmatic sent Fox News a legal threat that accused the network of participating in a “disinformation campaign” against it.